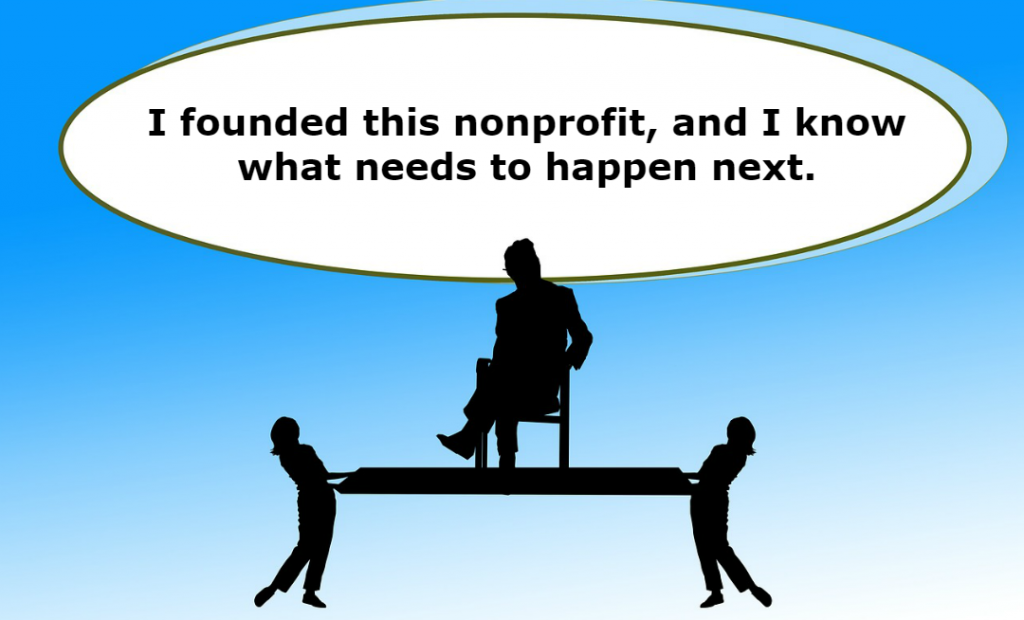 During the past year, I have encountered several examples of Founder’s Syndrome. While the facts differed from organization to organization, they all shared the same symptoms and suffered similar impacts.

Fortunately, much has been written about Founder’s Syndrome and how to address it. Unfortunately, it can be overwhelming to comb through the vast number of articles to find the true gems.

That’s what this article does for you. If you are dealing with Founder’s Syndrome, this summary of causes, symptoms, outcomes and approaches to managing the changes needed identifies the articles and resources that are most helpful in the process.

What is Founder’s Syndrome?

Founder’s Syndrome is a mismatch between the leadership needs of the organization and the skills of the leaders who are most influential in its management. It is called Founder’s Syndrome because it often arises with founders of nonprofit (or for-profit) entities. However, it can also occur with a person or people who helped turn the organization around, have been in a leadership position for an extended period of time, or helped create flagship programs.

The mismatch happens because the skills needed to start an organization or drive change are different from those required to manage a more mature organization. (For examples in a for-profit context, take a look at Noam Wasserman’s Harvard Business Review article The Founder’s Dilemma.) Launching a nonprofit takes charisma, vision, tenacity, and a commitment to rolling up the sleeves. However, when the organization becomes more mature, it takes a more sophisticated understanding of management to be successful. These skills sets are quite different, and, in my experience, rarely exist within the same leader.  Unfortunately, the organization often suffers as a result of the founder’s continued deep involvement.

Founder’s Syndrome can be hard to treat because these individuals’ past success makes people worry that removing them from the organization will destabilize the nonprofit. In addition, they often have a group of committed fans within the board or in the community who help perpetuate the idea that they are indispensable.

What are the Symptoms of Founder’s Syndrome?

How Do You Address Founder’s Syndrome?

If your nonprofit is suffering from Founder’s Syndrome, what’s the cure? The answer depends on who you are within the organization and where the Founder is.

When the Founder is the Executive Director

Joan Garry wrote a nice blog piece called Founders Syndrome Can Take Down a Nonprofit. Here’s How to Avoid It.  The article provides guidance on how to transition an executive director who is a Founder out of that role. It operates on the assumption that the executive director (ED) recognizes that it is time for him or her to leave. She recommends appointing a competent successor, publicly turning over controls, and declining a board seat if offered in order to make a clean break.

When the Founder Doesn’t Recognize the Need to Leave

However, addressing an ED who doesn’t recognize that it is time to leave his or her position is more difficult. When the board acknowledges that the time for transition has arrived, but the ED doesn’t yet understand that, the transition must be gentle. The Texas Art Commission’s article, Challenge of Founder’s Syndrome, suggests that the board create a succession plan, collaborating with the ED to determine when his or her departure might happen. If the board anticipates a difficult conversation, they can retain an outside coach or facilitator to facilitate the conversation. The Texas Art Commission’s article also suggests that the organization plan a public celebration of the founder’s (or founders’) contributions to the organization’s success.

When the Founder Doesn’t Want to Leave, and You Are a Minority Voice on the Board or a Staff Member

Of course, one of the traits of a founder is that they often recruit board members who support them. These loyal board members often insist that the organization cannot exist without the founder’s involvement. This can make it very hard for the majority to hear and appreciate the minority board’s perspective – or staff’s perspective.

A strong member of the board may be able to develop enough support to encourage a succession planning process. Staff members or less influential board members are in a more challenging position. You may only be able to raise the issue rather than making full-scale change.

Whether you are a board member or a staff member, Carter McNamara’s article Founder’s Syndrome: How Corporations Suffer — and Can Recover has some good suggestions. For example, suggest that the organization conduct a key risk management exercise annually. This encourages the organization to consider what life without the founder might be like. It also encourages a redistribution of knowledge and responsibilities. As a board member, you might encourage 360-degree evaluations or hire a professional coach. As a staff member, conducting a frank assessment of impact might facilitate a conversation with a supervisor.

Most articles argue that offering an outgoing founder/ED a seat on the board is a poor decision. I agree.

Unfortunately, sometimes the founder already has a seat on the board of directors. In some cases, the founder (or person exhibiting founder’s behavior) never had a paid position. They have always been board members. In fact, the worst Founder’s Syndrome case I have seen involved a founder who started as the board chair. They hired professional expertise to manage the non-profit but micro-managed them. They recruited inexperienced family members to serve as board members and refused to add outsiders for fear of giving up control. Finally, they changed the organization’s direction (and mission and vision) on a whim.

So, what can you do in this case? Unfortunately, not much. The ED can talk to the board chair and board about his or her concerns. However, if the board doesn’t see the issue, you may need to polish up your resume and resign. At some point, turnover may encourage the board to look for additional board members or consulting assistance.

Fortunately, most Founder’s Syndrome cases aren’t this egregious. In some cases, a board can resolve an issue by discussing the matter with the board member and encouraging them to resign. If you are unable to encourage their willing departure from the board, you can choose to vote them off of the board of directors.

Organizations can be proactive in addressing potential Founder’s Syndrome issues by instituting term limits for all board members. Of course, as Bill Pawlucy and Bob Harris point out in Facing Founder’s Syndrome, this can be tricky. The founder may have crafted the bylaws and/or they may have a strong group of fans on the board. Using an outside consultant to facilitate a discussion around best practices may help the organization achieve its goal. The same article also suggests including the founder(s) in a strategic planning process prior to the end of their term. This will help reassure them that their vision will live on beyond their board involvement.

Henry Lewis, in the Charity Channel Press article Founder’s Syndrome: An Affliction for Which There is Rarely Immunity, suggests that job descriptions, board selection procedures, provisions for board member evaluations, and a clarification of the distinct roles of the board and the CEO can also be helpful.

When You are the Founder

Worried you are the source of your organization’s Founder’s Syndrome? The good news is that recognizing the problem is the first step toward a cure.  Your goal is to work with your CEO/ED and/or board to create a smooth transition. The best article I found on addressing Founder’s Syndrome from this perspective was written by a founder. Founder’s Syndrome: Who me?, By Hildy Gottlieb provides a succinct series of steps to help address the problem.

What Has Worked for You?

Have you encountered Founder’s Syndrome? Do you have a solution that hasn’t been mentioned here? Please share it in the comments!

Also, please consider subscribing to my blog. If you do, I will send you a summary of the articles I publish each month. You can find subscribe here. 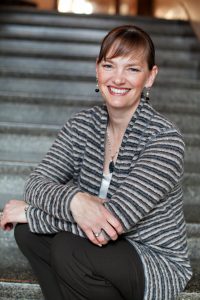